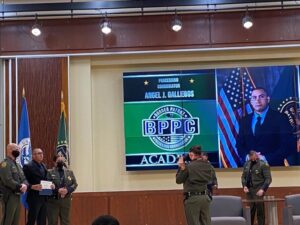 The Border Patrol is overwhelmed by the numbers of unaccompanied migrant children in its custody — on Sunday, there were 4,699 sleeping in austere conditions for days on end. But there’s help on the way. U.S. Customs and Border Protection is, for the first time, fielding teams of social service workers to relieve some of the agents from handing out mattresses and Pampers.

Last Friday, the sprawling Border Patrol Training Academy in Artesia, N.M., graduated 39 young men and women. But they won’t pull on the distinctive green uniform and go patrol the netherworld between the United States and Mexico. They’ll wear blue polo shirts and green pants and be assigned to work inside stations to care for the more than 5,000 individuals whom agents are apprehending every day — the biggest surge in 15 years. This is the first class of Border Patrol processing coordinators.

“We’re very excited to get out there and help our brothers and sisters in green [uniforms] and just assist other human beings,” says Karina Garza, a 31-year-old South Texan whose last job was selling Western wear. Now she’ll have a new kind of customer.

“With juveniles, you do feed them every six hours,” she says. “They do get hot meals, snacks, mattresses, blankets, all the essentials and necessities that they do request is provided to them.”

The idea to create a position for non-law enforcement personnel to take care of detainees first came up in 2014 under the Obama administration when the Border Patrol was swamped with an earlier wave of children migrating solo. Nearly 140,000 families and children were apprehended that year. The concept was not especially controversial because it served two purposes dear to Democrats and Republicans: It improved humanitarian treatment of detainees, and it strengthened border security.