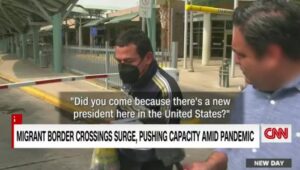 (CNN)The Biden administration has moved swiftly to distance itself from Trump-era immigration policies, but at the US-Mexico border, a pandemic-related order put in place by former President Donald Trump remains in effect, allowing officials to continue to turn away thousands of migrants.

The reliance on the order that permits officials to swiftly expel migrants underscores the challenges facing the administration along the US southern border, where arrests of families and children continue to rise.
Biden officials say that the order, decried by immigrant advocates, gives the administration time to make changes to the US immigration system, while still managing the influx of migrants at the border amid an ongoing pandemic. The Biden Justice Department also recently defended it in court.

As a result, recent arrivals to the border continue to be kicked back to Mexico or their origin country just as they were under Trump. In January, more than 62,000 people who crossed the southwest border were expelled, a number that has been relatively consistent for the past several months, according to the latest figures from Customs and Border Protection.
While the majority of arrests have been single adults, the increase of children and families — who pose the greatest challenge because of their vulnerability — complicates efforts to immediately reverse Trump-era border policies. The influx of unaccompanied children and limited capacity at existing facilities due to Covid-19, have already pushed the administration to open an overflow facility in Texas to accommodate kids who arrived at the US-Mexico border without a parent or relative.

“It’s bad and it’s getting worse,” a Homeland Security official said this week about the growing number of arrests at the US-Mexico border, particularly in south Texas.