Home Resources Thanksgiving: The Left’s Use of National Identity for Immigration Maximalism 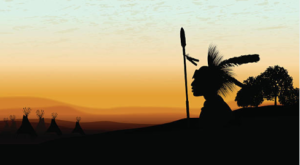 The American Left has come to characterize the pilgrims who arrived in Plymouth, Massachusetts in 1620 as the first immigrants of the nation, though they were settlers, for the purpose of justifying immigration maximalism.

In historian Samuel Huntington’s 2004 book Who Are We?: The Challenges to America’s National Identity, the political scientist correctly writes that the American nation’s founding began with settlers, not immigrants, as John O’Sullivan notes for the Claremont Institute:

As the late Samuel Huntington pointed out in his magisterial Who Are We?: The Challenges to America’s National Identity (2004), America is a nation of settlers and assimilated ex-immigrants. And what the immigrants assimilated to was the culture, institutions, language, and public memories of the original settlers. To be sure, the immigrants enriched the national identity of these first Americans but not to the extent of transforming it into a different identity. Huntington’s metaphor was that of a tomato soup that became a more delicious concoction when you added spices, garlic, basil, and chopped onions but that was still recognizably tomato soup.

Professor Charles Kesler’s 2005 essay for the Claremont Institute similarly examined Huntington’s Who Are We?, writing that the nation has undergone an “identity crisis,” though the country’s founding is rooted in Anglo-Protestantism, the culture of the settlers:

Though not inevitable, the disorder that [Huntington] discerns is fueled by at least three developments in the culture. The first is multiculturalism, which saps and undermines serious efforts at civic education. The second is “transnationalism,” which features self-proclaimed citizens of the world—leftist intellectuals like Martha Nussbaum and Amy Guttman, as well as the Davos set of multinational executives, NGOs, and global bureaucrats—who affect a point of view that is above this nation or any nation. Third is what Huntington terms the “Hispanization of America,” due to the dominance among recent immigrants of a single non-English language which threatens to turn America, in his words, into “a bilingual, bicultural society,” not unlike Canada. This threat is worsened by the nearness of the lands from which these Spanish-speaking immigrants come, which reinforces their original nationality.