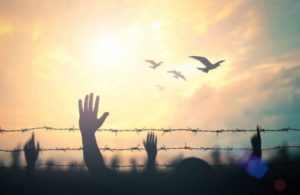 As Americans across the nation celebrated Thanksgiving this past weekend, many immigrants are also thankful. Whereas most Americans sat at tables overladen with food, in heated homes with an abundance of material goods, surrounded by family and friends, many immigrants sat alone, separated from their children, detained in makeshift, overcrowded detention centers, cold, confused and afraid. Yet, many of those immigrants are still more thankful than we Americans are. After surviving violence, hunger, persecution and perilous journeys for thousands of miles to the U.S., they are simply thankful to be alive. To stay alive… that is why many people become immigrants.

Similarly, hungry, persecuted Englishmen and women, refugees, escaping violence, made a perilous journey on the Mayflower to this land in Massachusetts in 1620. One year later, they celebrated, thankful to simply be alive with the help of the local Native Americans who showed them how to survive in a foreign land. Those refugees were the first thankful immigrants to the U.S. Those refugees were also the first Americans. For a nation founded by refugees, we have found ourselves in a deplorable situation of self-denial. Reducing the number of refugees we will admit in the U.S. in 2020 to 18,000 from 85,000 under the previous administration, is an insult to the founders of this nation. With the imposition of impossible mandates on immigration judges to review matters from this Administration’s 1 million backlogged cases (doubled from the previous administration’s backlog) in addition to this Administration’s refusal to timely approve employment authorizations for those persons eligible by law, the government is creating a sub-class of immigrants who will have to wait in limbo for years before being able to fully integrate into U.S. communities. American approach to immigration is not composed of solutions… only roadblocks. Yet, this crisis will not simply disappear.

The problems around the world that are forcing populations of people to be displaced are continuing and immigration is on a rise worldwide despite the implementation of anti-immigrant policies, even in Europe. The reality is that in a world where people can fly from one continent to another in hours, the world will have to come together to develop effective long-lasting migrant and immigrant policies. More particularly to us, as long as people find themselves in hopeless situations, some will try to find hope on our shores. It is time for us to take action and resolve immigration in a way that works for everyone. As a nation, this is what we should ask of those seeking to serve us in 2020. It is something we all would be thankful for.