Home Federal Enforcement Texas Prosecutor Drops Charges After Migrants Claim They Were Marched To Private Property, Then Arrested For Trespassing 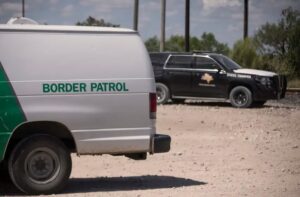 The Texas Department of Public Safety and U.S. Border Patrol insist the 11 men, arrested under Gov. Greg Abbott’s border initiative, weren’t set up for trespassing charges. But a county attorney decided the case was too muddled to prosecute.

Charges have been dropped against 11 migrants arrested under Gov. Greg Abbott’s border security initiative after the men told attorneys they were marched for about 20 minutes to a fenced ranch by law enforcement, then arrested for trespassing.

The men had fled on foot after a highway traffic stop by Border Patrol agents, according to an arrest affidavit. The migrants later told attorneys that when found near the highway, officers made the migrants walk for about 20 minutes and climb, hands zip-tied, over a nearly 10-foot fence onto a ranch before they were arrested for trespassing by state troopers.

The migrants also said officers cut the Val Verde County landowner’s fence so a police dog could get onto the ranch property, a defense attorney and prosecutor told The Texas Tribune.

But the muddled situation is just one instance in which Martinez, a Democrat elected to prosecute misdemeanor cases, said he felt compelled to drop charges because of uncertainty over whether DPS arrests pass legal muster.