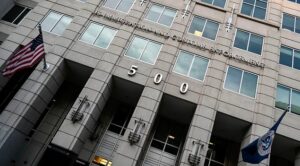 The Republican attorneys general of Texas and Louisiana are suing the Biden administration over a policy change in which federal immigration officials no longer seek custody and deportation of a majority of foreign nationals who are finishing jail sentences for criminal charges.

Texas Attorney General Ken Paxton announced the lawsuit on Tuesday, accusing the Biden administration of “endangering Texans” by refusing to order the automatic immigration detention of undocumented immigrants who have committed criminal offenses.

“President Biden’s outright refusal to enforce the law is exacerbating an unprecedented border crisis. By failing to take custody of criminal aliens and giving no explanation for this reckless policy change, the Biden Administration is demonstrating a blatant disregard for Texans’ and Americans’ safety,” Paxton said in a statement.

Paxton is among a group of GOP state attorneys general who are proactively challenging the Biden administration’s immigration policies in court.

The policy change was first set in place by the Department of Homeland Security in January as a provisional measure, and confirmed in February through a memo published by Immigration and Customs Enforcement (ICE).

Under the Trump administration, ICE used detainers aggressively, seeking custody of convicts of a wide range of crimes. But the Biden administration has decided to prioritize deportation of foreign nationals who present a national security threat, entered the United States after Nov. 1 or have committed an aggravated felony.

Texas state law makes it obligatory for state and local officials to cooperate with ICE detainers, but the practice is optional in many other states.