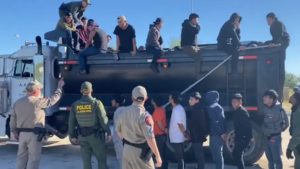 Texas Gov. Greg Abbott announced Tuesday that he will be invoking an “invasion” clause of both the U.S. Constitution and Texas Constitution to combat ongoing, overwhelming illegal immigration in the state.

“I invoked the Invasion Clauses of the U.S. & Texas Constitutions to fully authorize Texas to take unprecedented measures to defend our state against an invasion,” Abbott announced via social media Tuesday.

“I’m using that constitutional authority, and other authorization and Executive Orders to keep our state and country safe,” he continued.

The governor included a list of intended actions he claims are covered by the clause, including the activation of National Guard and Texas Department of Public Safety personnel to safeguard the border and turn back would-be migrants from illegally crossing the border.

DPS personnel will also be order to arrest and return illegal migrants to the border.

The governor went on to claim he will be deploying gun boats for defense of the southern border and will designate Mexican drug cartels as foreign terrorist organizations.

The “invasion clause” referenced by Abbott refers to Article IV, Section 4 of the U.S. Constitution, which states the U.S. “shall guarantee every state in this Union a republican form of government and shall protect each of them against invasion. “The Texas Constitution’s Article 4, Section 7 also states that the governor, as commander in chief of military forces, “shall have power to call forth the militia to execute the laws of the State, to suppress insurrections, and to repel invasions.”

The announcement seems to make good on a similar initiative floated by Abbott earlier this year in which he said he issued an executive order that allows Texas law enforcement to return illegal immigrants apprehended in the state back to the U.S. border.