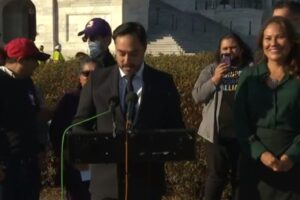 Border lawmakers urge immigrants to be patient, support measures shielding them from deportation now and fight for path to citizenship later.

EL PASO, Texas (Border Report) – As the House of Representatives might be getting ready to vote on the $2 trillion Build Back Better Act, possibly as early as Friday, two Texas Democrats on Thursday highlighted how it would reward essential workers who lack lawful immigration status.

“Immigrants are essential, and America is their home. They deserve to be here. Congress must deliver this much-needed relief in the form of work permits and deportation protection,” U.S. Rep. Joaquin Castro, D-Texas, said on the steps of the Capitol.

He was joined by advocates and some of the immigrants who stand to benefit from the bill.

The most recent version of the Build Back Better Act includes $100 million to speed up processing of immigration benefits and provisions to protect from deportation up to 7 million immigrants, according to some estimates.

The bill includes a five-year “parole” for undocumented immigrants who have lived in the United States since 2011. It does not include a pathway to citizenship, though advocates are pressuring Democrats to be bold and reconsider.

U.S. Rep. Veronica Escobar, D-Texas, said securing the current benefits in the act is a start.

“What we are left with very likely is work permits and protections. While that is absolutely inadequate, we have to get that across the finish line,” she said. “It buys Congress more time so we can fulfill our obligation and ensure we give them the path to citizenship they deserve.”

Both Castro and Escobar showered praise on undocumented immigrants in the food, hospitality and health industries who reported to their jobs during the COVID-19 pandemic while most American professionals got to work from home.