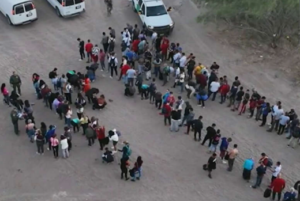 The “broken” immigration system at the border can be solved, but it’ll take bipartisan action, the mayor of a Texas border town told Fox News.

“You cannot have one state or a few municipalities deal with the brunt of this immigration,” Rio Grande City Mayor Joel Villarreal said. “We have to find a plan – a national plan.”

“And by the way, border communities are in favor of securing the border,” he added.

Since October 2021, there have been a record two million migrant encounters at the U.S. southern border and over half a million known “gotaways” – migrants spotted, but not apprehended by law enforcement – according to Department of Homeland Security sources. In comparison, there were 1.3 million encounters at this point in previous fiscal year.

“So, yes, we’re going to have the highest number of apprehensions here in the U.S.-Mexico border,” Villarreal told Fox News.

Border security can be tightened without inhibiting legal immigration if party leaders would cooperate, according to Villareal. As an example, he said President Biden, a Democrat, and Gov. Greg Abbott, a Republican, could come together and find solutions to stemming the flow of migrants.

“If you’re the president, call the governor, sit down and have a conversation,” Villareal told Fox News. If the two parties don’t cooperate, “then we’re going to continue to have this divide about immigration and border security.”

Villareal also criticized Biden’s policy of catch-and-release, which allows newly apprehended illegal immigrants to be freed in the U.S. The mayor said it’s “not beneficial to our country.”

Last September, Florida sued the Biden administration over its catch-and-release policy, arguing that it causes harm to the state’s “quasi-sovereign interests.” A federal judge in May allowed the case to advance and said Biden’s policies are “little more than a speedbump” for illegal immigrants at the southern border.