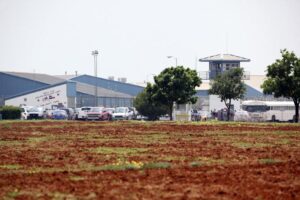 AUSTIN, Texas (AP) — Texas is beginning to arrest migrants on trespassing charges along the U.S.-Mexico border as part of Republican Gov. Greg Abbott’s actions that he says are needed to slow the number of border crossings, jailing at least 10 people so far with more on the way, authorities said Thursday.

The arrests put in motion plans that Abbott first announced in June, when he also said that Texas would continue building former President Donald Trump’s border wall and called on other governors to deploy law enforcement and National Guard members to the southern border.

The detainees are being held at what had been an empty state prison in Dilley, Texas, about 100 miles (160.93 kilometers) north of the border city of Laredo, said Robert Hurst, a spokesman for the Texas Department of Criminal Justice. He said the converted facility will be able to hold more than 950 people.

All of those arrested so far have been single adult men, according to Val Verde County Attorney David Martinez, who said he was advised last week that the number of migrant arrests could increase to as many as 100 or 200 per day. Such large numbers, he said, “would overwhelm not only my office, but our entire system pretty quickly.”

Most land along the southern Texas border is private, but Martinez said his understanding was that state troopers would not arrest family units. Last week, U.S. officials reported that they had encountered 55,805 members of families with children in June, which was up 25% from the previous month. That figure still remains far below the high of 88,587 in May 2019.

“If John Doe is caught on my property and he has his wife and his children with him, chances are he’s not going to be arrested,” Martinez said. “That’s what’s been represented to me.”

A spokesman for the Texas Department of Public Safety did not immediately return a message Thursday.