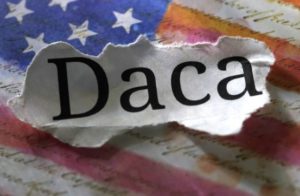 NASHVILLE, Tenn. (AP) – For Alexa Maqueo-Toledo, who traveled with her mom to a small town in Tennessee from Mexico when she just a toddler, sitting back while the Supreme Court prepares to determine her future wasn’t an option.

The 19-year-old recipient of the Deferred Action for Childhood Arrivals program is one of the 8,000 young people currently enrolled in Tennessee.

And Tuesday, she’ll join fellow DACA recipients and hundreds of other supporters in Washington D.C. as the nation’s highest court listens to oral arguments on the Trump administration’s plan to end the legal protections the program offers to her and roughly 700,000 people.

“I feel like people need a face of DACA. They need to see who this affects,” Maqueo-Toledo told The Associated Press in a recent phone interview. “This isn’t just a policy. I want people to see on TV, listen to our voices on the radio and know this is our livelihood at stake.”

Often called “Dreamers,” the Obama-era program applies to people who were brought to the U.S. illegally as children or came with families that overstayed visas. In most cases, these recipients know no other home than the U.S.

For Maqueo-Toledo, she has no memories of Mexico. Instead, she has stories her mother has shared about the growing violence in Mexico City that prompted her family to move to Oak Ridge, Tennessee when Maqueo-Toledo was 3 years old.

It wasn’t until years later, when Maqueo-Toledo was in high school, that she learned she was in the U.S. illegally. But at 15 years old, she was able to apply for DACA in order to receive a driver’s license and a work permit – vital tools she needed to get a job and help her mother out with the finances.

Now a sophomore at Maryville College, studying sociology as well as minoring in communications and Spanish, Maqueo-Toledo has become passionate about letting others know what’s at stake surrounding the high-profile Supreme Court case.