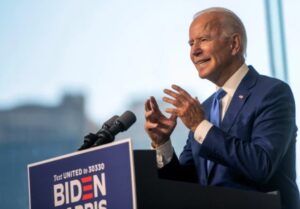 In a public letter, the group of 24 computer scientists — all winners of the Turing Award, known as the Nobel Peace Prize of computer programming — bemoaned Trump’s crackdown on certain visas used by tech companies in a bid to force them to hire Americans first amid the pandemic.

“We celebrate open source projects, the lifeblood of our field, as exemplars of international collaboration,” they added.

The scientists “enthusiastically” endorsed Democratic nominee Biden and his running mate, Kamala Harris, citing their ability to “listen to experts before setting public policy,” which they said was “essential when science and technology may help with many problems facing our nation today.”

In an accompanying interview with the New York Times, David Patterson, a distinguished Google engineer, said the president’s decision to limit immigration would lead to a brain drain.

“The most brilliant people in the world want to come here and be grad students, but now they are being discouraged from coming here, and many are going elsewhere,” Patterson said.

The industry has increasingly waded into the November election fight after Trump in June halted several work-based immigration programs including H1-B visas, which allow American employers to hire immigrants with specialized skills.