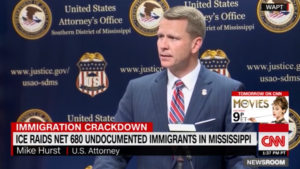 (CNN) – One of the companies targeted in last week’s immigration raids in Mississippi is holding a job fair Monday about 11 miles from one of its plants that was raided.

Koch Foods, a poultry processor, says the fair will be held at a job center in Forest beginning at 9 a.m. (10 a.m. ET). Job applicants will need two forms of identification, the company says.

The fair is being hosted by the Mississippi Department of Employment Security. Koch representatives contacted state employment officials Wednesday, the same day two of its Mississippi plants were raided by immigration authorities, said department spokeswoman Dianne Bell.
On Wednesday, US immigration authorities raided the Koch Foods plant in Morton, about 11 miles west of Forest, and six other Mississippi food processing plants. They rounded up 680 immigrants in what a federal prosecutor said was “believed to be the largest single-state immigration enforcement operation in our nation’s history.”

Workers exit a Koch Foods processing plant in Morton after Wednesday’s raids.
The fair is part of an effort to secure workers for the Morton plant, Bell said.

Koch Foods wasn’t sure how many of its employees were arrested in the operation because authorities also seized all of its employment records, it said in a statement. No managers or supervisors were believed to be among those arrested, the company said.

“When Koch Foods puts such (workers) through the E-Verify system, the system indicates that the worker is authorized because, unbeknownst to Koch Foods and the E-Verify system, the information that the worker has provided pertains to the stolen identify of an authorized worker,” the statement said.
“Federal immigration and discrimination law require Koch Foods to accept documents that appear authentic,” the company said.