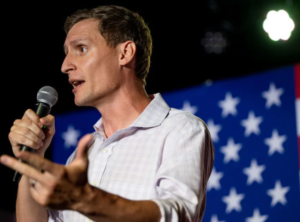 In Republican primary races this year, few issues have come up more in TV ads than immigration. And one word in particular stands out: invasion.

A few years ago, that word was confined to the fringes of the immigration debate. Most candidates would avoid it.

In this election cycle, it’s moved squarely into the mainstream.

“We’re gonna end this invasion,” Blake Masters, a Republican candidate for the U.S. Senate in Arizona, says in a campaign ad.

The word has also appeared in ads for Gov. Brian Kemp in Georgia, Sen. Rick Scott in Florida, and Kari Lake, who’s locked in a close race in the Republican primary for governor in Arizona.

“Before these ideas might have been seen as outliers. But now, it is really troubling,” said Vanessa Cárdenas, the deputy director of America’s Voice, an immigrant advocacy group that’s been tracking political ads. It’s found dozens of ads that use the word invasion by Republicans campaigning all over the country.

“This type of rhetoric, it’s meant to agitate people for political reasons,” Cárdenas said, “because it makes people feel anger and hate.”

It’s been three years since a white gunman opened fire at a Walmart in El Paso, killing 23 people, most of them Latino. The suspect was motivated by what he called a “Hispanic invasion” of people coming to the U.S. illegally.

Since then, the number of migrant apprehensions at the southern U.S. border has climbed to new records — while the political rhetoric around immigration has gotten more extreme.

The word invasion has a long history in white nationalist circles. For years, it was used widely by supporters of the “replacement theory” — the false conspiracy theory that says Jews or elites are deliberately replacing white Americans with immigrants and people of color. Until recently, you rarely heard it from Republican officeholders or candidates.