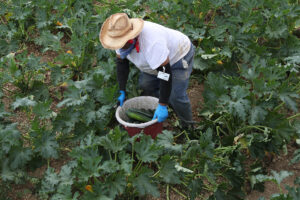 Advocates and the Biden administration have been working to include the needs of farm workers in immigration reform proposals.

Democratic lawmakers unveiled sweeping immigration reform legislation Thursday that could significantly improve the working conditions for farm workers and put them on a long-awaited path to citizenship.

Advocates have for years demanded changes from the Departments of Labor and Homeland Security to address workplace violence and employer manipulation that cause shorted wages, missed benefits, sexual violence and other workplace violations among agriculture workers.

“We really were pushing for legal protections of essential farm and food system workers who have fallen through the cracks not only of this current immigration system but of previous immigration proposals that have not addressed their needs and concerns. And that there is an expedited plan for citizenship,” said María De Luna, national policy and advocacy coordinator at Alianza Nacional de Campesinas.

The U.S. Citizenship Act of 2021, introduced by Rep. Linda Sánchez (D-Calif.), would require that DHS and the DOL establish a commission involving labor, employer and civil rights advocates to make recommendations to improve the employment verification process and it increases protections for workers who “suffer serious labor violations and cooperate with worker protection agencies,” according to the White House fact sheet.

The bill also protects workers who are victims of workplace retaliation from deportation in order to allow labor agencies to interview these workers. It also increases penalties for employers who violate labor laws on undocumented workers, including wage and hour, family and medical leave, occupational health and safety, civil rights and nondiscrimination violations.

Sen. Bob Menendez (D-N.J.) is expected to introduce companion legislation in the Senate next week.