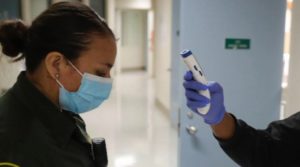 WASHINGTON – Despite the health risks of the coronavirus, the Supreme Court refused Friday to stop the Trump administration from denying green cards to immigrants who use public benefits.

The court’s short, unsigned order denied the request of New York, Connecticut, Vermont and New York City, which contended that the new policy disincentivizing immigrants’ use of Medicaid and other benefit programs could lead to the spread of COVID-19.

The justices in January had allowed the policy to take effect despite a series of lower court injunctions that had blocked it. Several cases challenging the policy are pending before federal appeals courts.

Under the Department of Homeland Security rule, legal immigrants receiving or deemed likely to need non-cash benefits for more than a year, such as food stamps, Medicaid or housing vouchers, can be denied residency or green cards.

“To protect benefits for American citizens, immigrants must be financially self-sufficient,” President Donald Trump said when the policy was introduced in August.

Last month, the administration revised the rule to permit those covered by it to get treatment or preventive services for the coronavirus without jeopardizing their status. But the states contended that was insufficient.

“The rule makes it more likely that immigrants will suffer serious illness if infected and spread the virus inadvertently to others – risks that are heightened because immigrants make up a large proportion of the essential workers who continue to interact with the public,” New York Attorney General Letitia James wrote.

The rule, which originally was to take effect last October, allows immigration officials to consider public aid in deciding whether to grant legal status, along with other factors such as health, education and household income.

In addition to considering whether an immigrant currently receives benefits, they also can decide if there is a likelihood the person will need assistance in the future.

The definition of a “public charge” focuses on those who are primarily dependent on government aid, receiving more than half their income or long-term medical care from the government.