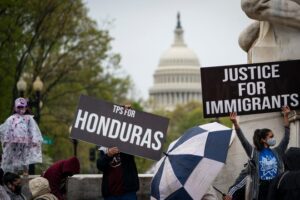 WASHINGTON – Jose Sanchez and Sonia Gonzalez have lived in the United States legally for two decades under a program that lets immigrants from nations enduring natural disasters and armed conflict temporarily avoid returning to their native countries.

But when the New Jersey couple applied for green cards – which would let them remain permanently – they were denied because they initially entered the country illegally.

The Salvadorans sued in 2015 and the Supreme Court will hear their appeal Monday in a case that has drawn little attention in Washington even as it has raised significant questions about the Biden administration’s approach to immigration – not to mention the status of hundreds of thousands of immigrants living in a state of limbo.

“We want to keep families together and something like this would just be another bump in the road for people to be able to continue to be with their families,” said Maria Zavaleta, a spokesperson with the National TPS Alliance, a group that advocates for immigrants who benefit from the Temporary Protected Status program.

Critics of TPS say it was intended to provide temporary relief, not permanent residence.

Immigration disputes have largely fallen off the high court’s docket this year after President Joe Biden took office: Many legal questions raised by President Donald Trump’s administration are now moot because Biden abandoned the previous policies. But in this case, it was President Barack Obama’s administration that denied the green cards and it is Biden’s Justice Department that has defended that decision in court.

That has vexed immigrant advocates and experts who note the White House proposed a bill this year to address the same issue involved in the case. The proposed U.S. Citizenship Act, which faces long odds, would let Sanchez and Gonzalez apply for green cards given their current status – no matter how they entered the country.