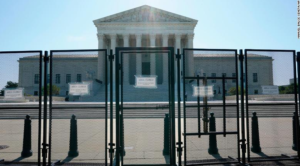 (CNN)The Supreme Court dismissed an appeal Wednesday brought by a group of Republican-led states seeking to intervene in a case challenging the Trump-era “public charge” immigration policy, a version of which the Biden administration has abandoned.

The case did not center on the legality of the rule but instead whether the Biden administration followed proper procedures when it set out to revoke the rule and dismiss pending legal challenges.

The Trump-era policy — an expansion of the so-called “public charge” rule — made it more difficult for immigrants to obtain legal status if they use certain public benefits, such as Medicaid, food stamps and housing vouchers.

Wednesday’s order is a blow to conservative states that had asked the court step in to reinvigorate legal challenges.

Roberts expressed frustration with the Biden administration for sidestepping certain procedures for reversing the Trump policy. He said the maneuvers raised “a host of important questions” for future disputes.

Nevertheless, he said it had “become clear that this mare’s nest could stand in the way of our reaching the question presented” in the case, and therefore agreed that the challenge should be dismissed.

“If the justices had allowed these states to continue to defend the Trump-era policy, that would’ve set a remarkable precedent for other states to follow at the end of both this presidency and future ones,” said Steve Vladeck, CNN Supreme Court analyst and professor at the University of Texas School of Law.

“Although the court did not specifically reject the states’ effort, its summary, procedural ruling leaves intact the lower court ruling that did — a precedent that will matter going forward.”