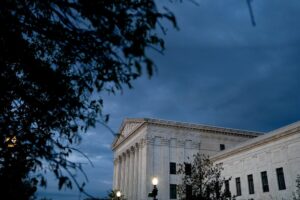 The justices heard arguments on whether immigrants with “temporary protected status” who entered the country illegally may apply for lawful permanent residency.

WASHINGTON — The Supreme Court seemed ready on Monday to rule that immigrants allowed to stay in the United States temporarily for humanitarian reasons may not apply for green cards if they had entered the country unlawfully.

The case, which could affect tens of thousands of immigrants, was brought by Jose Sanchez and Sonia Gonzalez, natives of El Salvador who entered the United States unlawfully in the late 1990s. In 2001, after earthquakes devastated El Salvador, the United States made that country’s nationals eligible for the “temporary protected status” program, which shields immigrants from parts of the world undergoing armed conflicts and natural disasters from deportation and allows them to work in the United States.

Mr. Sanchez and Ms. Gonzalez, a married couple, were granted protection under the program. In 2014, they applied for lawful permanent residency, commonly known as a green card. After their application was denied, they sued.

The United States Court of Appeals for the Third Circuit, in Philadelphia, ruled against them, saying they were ineligible under a part of the immigration laws that requires applicants to have been “inspected and admitted” into the United States.

“As its name suggests,” he wrote, “this protection is meant to be temporary.”

The law has interlocking provisions, some of which are hard to reconcile, Justice Stephen G. Breyer said. “I have to admit that the immigration statute is pretty complicated,” he said.

Amy M. Saharia, a lawyer for the couple, relied on another provision, this one saying that people granted temporary protected status “shall be considered as being in, and maintaining, lawful status as a nonimmigrant.” She said that meant they had effectively been admitted to the United States.