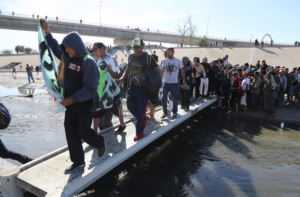 In a 5-4 vote, the U.S. Supreme Court has allowed Joe Biden to strike down a controversial immigration policy that was put in place during Donald Trump’s presidency, with justices John Roberts and Brett Kavanaugh siding with the liberal-leaning justices.

On Thursday, the court ruled in Biden v. Texas that Biden’s administration was not in violation of the Immigration and Nationality Act to terminate the “Remain in Mexico” program, officially called the Migrant Protection Protocols, or MPP.

The rule — which requires asylum seekers to wait outside of the U.S. for immigration courts to decide their cases — was suspended by President Joe Biden when he took office, but later reinstated by the administration after a Trump-appointed U.S. District Court judge sided with officials in Texas and Missouri who wished to put the policy back in place.

After lower courts blocked the Biden administration from terminating the policy, it was up to the Supreme Court to consider where the program could continue.

More than 60,000 asylum seekers were returned to Mexico during the Trump administration and under the policy, which was launched in 2019.

Human rights advocates say the policy is inhumane because it leaves migrants who are stranded in Mexico vulnerable to violence — including sexual assault and kidnapping — and exposed to unsanitary conditions during long waiting periods while their immigration proceedings continue back in the U.S.

Last December, the Biden administration worked to address some of those concerns, with the Department of Homeland Security announcing that the U.S. and Mexico reached a deal that addresses humanitarian concerns, including a new six-month limit on court proceedings and improved access to counsel for those with cases pending.

In an announcement, the DHS also reiterated concerns voiced by Secretary Alejandro Mayorkas that the program “has endemic flaws, imposed unjustifiable human costs, pulled resources and personnel away from other priority efforts, and failed to address the root causes of irregular migration.”