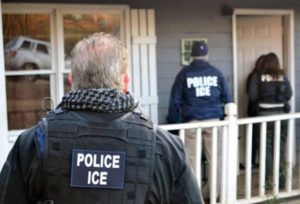 The Supreme Court on Tuesday questioned the Biden administration’s authority to prioritize which non-citizens to deport when hearing a challenge brought by two Republican state attorneys general who say the Department of Homeland Security is skirting federal immigration law.

The justices were considering three distinct issues in the case, which opens the door to shifting majorities. After arguments, it wasn’t clear if there was a clear majority in any one area.

The case, brought by Texas and Louisiana, is the latest salvo from conservative states who have all but declared war on the Biden administration on immigration and have gone as far as busing undocumented immigrants to Democratic-led states in an effort to raise alarm about the issue.

At the heart of the dispute is a September 2021 memo from Homeland Security Secretary Alejandro Mayorkas that laid out priorities for the arrest, detention and deportation of certain non-citizens, reversing efforts by former President Donald Trump to increase deportations.

Several of the conservative justices on Tuesday seemed ready to rule in favor of the states on a major threshold issue: whether Texas and Louisiana had the legal right to bring the challenge in the first place.

Justice Samuel Alito seemed strongly in support of the states, arguing they could show the necessary legal harm to get into court. At one point, Alito told a lawyer for the Biden administration that her argument against the states’ standing showed a “special hostility” to the states.

Liberal Justice Elena Kagan, however, strenuously responded that immigration policy is the “zenith” of federal power and if the two states were to prevail in this case, “every” immigration policy going forward is going to be challenged. She said a combination of the states and sympathetic courts could bring immigration policy to a “dead halt.”

Turning to the merits of the case — whether the Biden administration’s guidelines conflicted with two provisions of federal law — Alito, Chief Justice John Roberts and Justice Brett Kavanaugh repeatedly pointed out that the law says that some immigrants “shall” be taken into custody or removed, suggesting some skepticism about the administration’s discretion in the area.