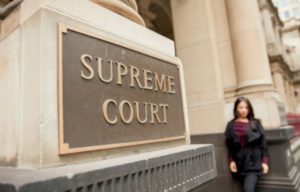 The Supreme Court handed President Trump a significant defeat Monday, turning down the administration’s plea for a quick ruling that would have upheld the president’s power to end special protections for so-called Dreamers.

The court’s decision keeps in place a legal shield for nearly 700,000 young immigrants for the rest of this year, and perhaps longer, allowing people who have been covered by the Obama-era Deferred Action for Childhood Arrivals program to continue living and working legally in the U.S. Those whose existing DACA permits expire this year will also be allowed to apply for another two-year permit.

Although the court’s action removes for now the threat of job loss and deportation, it also will extend the long-term uncertainty for the Dreamers — young immigrants who were brought to the U.S. illegally as children. Congress has been stymied on a legislative solution to their situation, and without an immediate deadline to force action, lawmakers almost certainly will not try again to forge a compromise on immigration before this fall’s midterm elections.

Last September, Trump announced that he would end the DACA program and gave Congress until March 5 to pass legislation to resolve the legal status of the Dreamers. Then, in early January, U.S. District Judge William Alsup in San Francisco ordered the government to keep the DACA program running until legal challenges could be fully aired, ruling that Trump’s order had been based on a “flawed legal premise.” A district judge in New York this month issued a similar ruling.

In seeking to get Alsup’s order overturned, the Justice Department sought to leapfrog the U.S. appeals court in California, asking the Supreme Court to grant an “immediate review” of Alsup’s nationwide order.

The action the administration sought was rare. It has been nearly 30 years since the Supreme Court granted review of a district judge’s ruling before an appeals court could weigh in. And the court said Monday it had no interest in following that course in the DACA case.