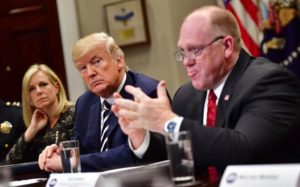 By all accounts, the Legal Orientation Program (LOP) has been a smashing success for the federal government. The program — which provides rudimentary legal guidance to people facing deportation — saves taxpayer money, speeds the court process, and has been praised by judges, lawyers, and Immigration and Customs Enforcement. But the Trump administration has ordered the program shut down, at least temporarily, as of April 30. The administration says it’s pausing the program to study its effectiveness. To Trump critics, it is the latest in a series of changes to the immigration court system aimed at speeding up a “deportation machine.”

“It is like we are playing a game with people’s lives at stake and the rules are constantly changing,” said Ruby Powers, a Houston attorney who has practiced immigration law for a decade. “We have to constantly watch the news, talk with other attorneys on forums and at conferences, and readjust the strategy and communicate these changes to our multitude of clients. We have to work 24/7 with heavy consequences if we give the wrong advice. This is not for the faint at heart or those who don’t know how it worked beforehand.”

The immigration court system has long operated with little public attention. That began to change as the Trump administration rolled out numerous changes. On April 1, comedian John Oliver devoted 18 minutes of his half-hour HBO show to the current state of immigration courts, with much of the focus on the lack of legal representation for children and others facing deportation.

In recent months, the Trump administration has rolled out numerous initiatives around immigration. President Trump moved to end President Obama’s Deferred Action for Childhood Arrivals, or DACA, which protected from deportation hundreds of thousands of people who came to the country illegally as children. DACA remains in place as courts review Trump’s actions.