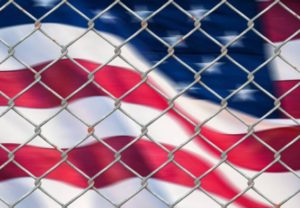 A White House proposal would slash legal immigration rates by 44 percent this year and result in 22 million fewer immigrants over the next five decades when compared to current law, according to a Cato Institute study released Monday.

The analysis from David Bier and Stuart Anderson found that nearly half a million immigrants who are expected to be awarded green cards in fiscal 2018 would not be eligible under the framework President Donald Trump’s aides released late last week amid ongoing congressional negotiations. In all, about 1.1 million foreigners are on pace to receive green cards this year authorizing legal permanent residence in the United States.

“Restricting legal immigration will unnecessarily deny opportunity to many people and have far-reaching negative consequences for economic growth in the United States,” the authors wrote. “The White House proposal is the opposite of the reforms that would lead America toward prosperity.”

The Cato study comes as some lawmakers in both parties have called on Trump to drop his demands to curb legal immigration and narrow the scope of negotiations to the fate of younger undocumented immigrants known as “dreamers” and border security upgrades.

White House aides said Trump’s plan represents a compromise aimed at breaking an impasse in Congress ahead of a Feb. 8 deadline for a must-pass spending bill to keep the government open. Some Democrats and a few Republicans have said they would not support a long-term budget deal without a resolution on the dreamers.

Trump terminated the Obama-era Deferred Action for Childhood Arrivals program for about 690,000 dreamers last fall and set March 5 as the deadline when the bulk of their work permits would begin to expire. A federal judge has issued a temporary restraining order reinstating the program, although legal analysts said the decision probably would be overturned if challenged.