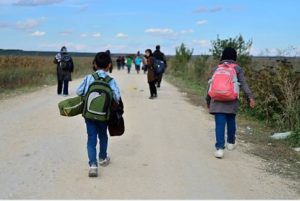 After two years of Donald Trump and his anti-immigrant rhetoric, fewer immigrant families are using federal food stamps — even though no formal changes have been made to the program or its eligibility rules.

The implication, according to researchers who have been studying the program for decades and other experts tracking the consequences of Trump’s immigration crackdown, is families who should still be eligible for those benefits — and who still need them — have voluntarily decided to leave the program for fear that they would be at risk if they applied through the official channels.

In other words, it appears Trump is making immigrant families too afraid to apply for federal assistance so they can afford food.

Researchers from Boston Medical Center’s Children’s HealthWatch have run an ongoing survey of welfare recipients since the 1990s. Lead author Allison Bovell-Ammon presented her and her colleagues’ new findings this week at a meeting of the American Public Health Association.

Their study found that participation in the Supplemental Nutrition Assistance Program by immigrant families who have been in the United States for fewer than five years and who are eligible dropped by nearly 10 percent in the first half of 2018. Immigrant families who have been in the US for more than five years also saw a drop in their SNAP participation, though a smaller one: 2 percent.

“Based on what we’ve heard anecdotally, people are really scared for their future,” Bovell-Ammon said in an interview.

These are preliminary findings, and it’s difficult to directly connect cause and effect here. But the Boston Medical Center study is some of the first data that supports what advocates and physicians who work with immigrant families have heard out in the field.

“I think that this is … confirmation of what we’ve been hearing from our networks of affiliates about the fear and the trepidation that immigrant families and their children have when it comes to interacting public benefits,” David Thomsen, who works on health policy at UnidosUS (formerly La Raza), which was not involved with the research, said.

The problem could only get worse when the Trump administration finalizes new regulations that would, in effect, punish migrant families for accessing public benefits.