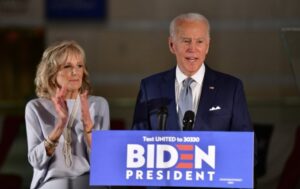 The immigration advocacy group, The Immigration Hub, says it’s identified nearly 6 million voters in four 2020 swing states (including Pennsylvania) that it believes can be swayed to vote for former Veep Joe Biden if they’re delivered the right messaging on immigration, an issue that had been one of the pillars of President Donald Trump’s popularity, but is now dragging him down in some polls.

Recent polling indicates that three years’ worth of hard-line rhetoric from the Republican White House on immigration has begun to cost Trump some support. In a Franklin & Marshall College poll last week, registered voters in Pennsylvania said, 51-37 percent, that Trump had earned a failing mark on immigration issues.

Separate polling by Immigration Hub and two other immigration advocacy groups indicated a similar bleed nationwide, with 57 percent of respondents saying they were deeply troubled by the administration’s “cruel and inhumane immigration policies” compared to 43 percent who said they were most upset about “open border immigration policies,” according to The Hill, a publication that covers Congress.

Working at the Immigration Hub’s behest, the research firm Civis Analytics spent a month test-driving two ads, each describing the ground level impact of Trump’s policies, to 9,000 moderate voters in Colorado, Michigan, Pennsylvania and Wisconsin. Based on those voters’ reactions, the analytics firm extrapolated, coming up with its model of nearly 6 million moderate voters across those four states that they believe can be successfully convinced with similar messaging.

Indeed, researchers acknowledge that their inclusion “may be counter-intuitive, but we found that many audiences that are more sympathetic to immigrants (i.e. white college women and people of color) are already supportive of Democrats and their position on immigration.”