Home Politics Stoking Fears Of Immigrants Has Been Part Of The Republican Platform For Decades. But Something Is Different This Time 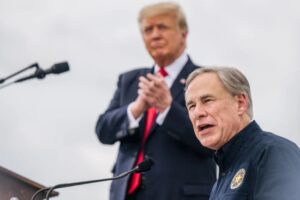 Donald Trump and the crude, hostile rallying cries against immigrants that powered his rise have vacated the White House — but his message hasn’t gone out of style.

As they gear up for key races in 2022 and 2024, many Republicans have adopted the ex-president’s rhetoric in his absence, stoking racial and ethnic anxieties over immigration and blaming President Biden for what they paint as dystopian and dangerous conditions at the US-Mexico border that they say are threatening the interior.

“Homes are being invaded,” Texas Republican Governor Greg Abbott said at a May press conference unveiling plans to finish Trump’s border wall in the Rio Grande Valley. “Neighborhoods are dangerous, and people are being threatened on a daily basis with guns.”

The rhetoric has reached cities as small as Brackettville, Texas, where local officials signed a state of disaster letter declaring their rural border county “under siege” as immigrants “invade.” Republican governors in states nowhere near Mexico, including South Dakota and Ohio, are heeding the calls from Abbott and Arizona Governor Doug Ducey to send National Guard troops and other law enforcement agents to patrol the nation’s southwestern edge.

The Biden “administration has turned every town into a border town, and every state into a border state,” Tennessee Senator Marsha Blackburn told reporters last week, referencing migrant children flown into shelters in her state. “Look at what we would be opening our country, our communities, our states, to, if this is allowed to continue.”

Tough talk on border security and immigration has long been a staple of Republican politics, particularly during primaries, when politicians often vow to crack down on illegal immigration. But Trump took the rhetoric to a new level in both volume and intensity as president, frequently complaining of an “invasion” of nameless immigrants and depicting border crossers as criminals and “killers” in his rally speeches.