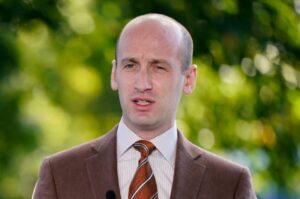 The national attitude toward immigrants was less hostile than California’s. “Immigration is not a problem to be solved,” President George W. Bush said at a speech he gave in the summer of 2001 at Ellis Island. “It is a sign of a confident and successful nation.”

He and Mexico’s president Vicente Fox were in talks about a guest worker program to meet industry labor needs in a structured way.

It all came to a grinding halt on September 11, 2001, when the United States was attacked by terrorists. Miller watched the nightmare unfold on television: The Twin Towers were hit by two planes. The towers crumbled. People were burned alive, crushed to death or leaped from windows to their deaths. Another airplane crashed into the Pentagon. A fourth, believed to be headed for the Capitol, plummeted into an empty field after passengers overtook the hijackers. Nearly three thousand people were killed. It was the deadliest terrorist attack in history.

A multimillionaire Saudi extremist, Osama Bin Laden, had de- clared war on the US, citing its military presence in the Arabian peninsula, the war in Iraq and support for Israel. Bin Laden called those actions “a clear declaration of war on Allah, his messenger, and Muslims.” It was, in his view, a war between Islam and the West. Historian Bernard Lewis wrote in Foreign Affairs, “To most Americans, the declaration is a travesty, a gross distortion of the na- ture and purpose of the American presence in Arabia. They should also know that for many—perhaps most—Muslims, the declaration is an equally grotesque travesty of the nature of Islam and even of its doctrine of jihad . . . At no point do the basic texts of Islam enjoin terrorism and murder.”