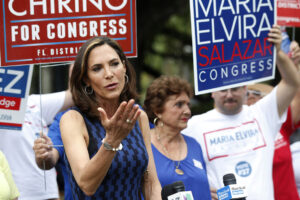 Freshman GOP Rep. María Elvira Salazar got into a lively exchange over immigration with former Trump aide Stephen Miller during a meeting with House Republicans on Wednesday, according to multiple GOP sources.

The confrontation came during the end of Miller’s presentation before the Republican Study Committee, the largest conservative caucus within the House GOP. Miller, the architect of Donald Trump’s hard-line immigration policies, such as the separation of migrant families at the border, addressed the group alongside another former Trump administration immigration official.

Sources say the Floridian Salazar pushed for immigration policies that would broaden the GOP tent while challenging Miller on how Republicans can attract Latino voters given the ultraconservative policies he is advocating.

A few members chose not to attend the RSC event specifically because Miller was the guest, one source told POLITICO.

The gathering — which also included Mark Morgan, a top Trump immigration official — comes as Democrats are expected to soon take up legislation to overhaul the U.S. immigration system. Miller, one of the most polarizing figures during the Trump presidency, has called Biden’s immigration plan “the most radical immigration bill ever written, drafted, or submitted in the history of this country.”

The GOP made surprising gains among Latino voters in 2020, including in Florida and along the Texas-Mexico border, and Republicans are eager to build upon those successes in the next election, which will be crucial to protecting swing seats — including Salazar’s Miami-area district.

Salazar is a Cuban American, and immigration is among her top policy areas of interest. During her campaign for Florida’s 27th District, she highlighted U.S. policy toward Cuba and Latin America more broadly. And Salazar belongs to one of the House GOP’s most diverse freshman classes in history, though the party is still overwhelmingly white and male.