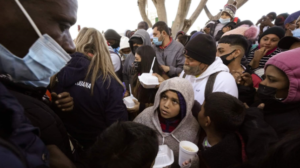 On the morning of April 28, Texas Republican Attorney General Ken Paxton filed his 11th immigration-related lawsuit against the Biden administration, submitting his paperwork before a U.S. District Court judge in the panhandle city of Amarillo and then issuing a news release about it.

That same day, a coalition of 14 other red states filed a similar lawsuit in an Arizona federal district court.

The coordinated effort aims to block a new policy allowing individual U.S. asylum officers—rather than immigration judges—to rule on the claims of newly arrived immigrants. It’s also part of a trend that’s taken hold among GOP attorneys general in the past year, and one they borrowed from their blue-state counterparts.

Since President Joe Biden’s inauguration in January 2021, red states have filed suits over mask mandates, COVID-19 vaccine rules for large employers and the social cost of greenhouse gas emissions, but appear especially interested in thwarting migration over the U.S.-Mexico border. Republican attorneys general have filed more than a dozen multistate lawsuits in the past year to block Biden immigration policies they don’t like.

The tactic of multistate coalitions blocking federal policies or actions has become a powerful tool in the arsenal of state attorneys general, according to Paul Nolette, chair of the political science department at Marquette University. Nolette has been tracking multistate litigation from state attorneys general since 2007 and is the creator of attorneysgeneral.org, a website dedicated to the data.

He said states wanting to block Biden’s immigration policy simply have to go to a favorable district judge, preferably a conservative one appointed by a Republican president, present their argument and ask for a preliminary injunction. If a judge grants the injunction, the policy is halted, Nolette said.