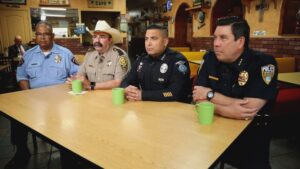 Outsiders may think “the sky is falling” on the Texas border as crossings surge, say local cops, but their towns are safe, even if their jobs have changed.

PHARR, Texas — Every week, chiefs of police from the Rio Grande Valley meet for breakfast at the Junction Cafe in this border town to eat machacado con huevo and swap stories.

On a recent Wednesday, sitting at his usual table, Pharr Police Chief Andy Harvey described a frantic call he got from a man who’d escaped from a stash house where he’d been held with 70 other undocumented migrants.

Human smugglers, or “coyotes,” commonly use stash houses as holding pens as they prepare to sneak migrants deeper into the U.S.

In this case, Harvey recalled, “they were left to fend for themselves to the point where one of them snuck out and called us, 911, the local police, to come help them because they were pretty much left alone.”

The house, a yellow converted trailer on a quiet street, would have gone unnoticed if not for the call. The man told Harvey that he escaped because conditions had made him afraid for his life. He said that there was no running water or furniture but that the coyotes had warned all 70 men and women not to leave.

Harvey found the house full of migrants, who were later handed over to federal immigration agents. Harvey also found a spiral notebook containing the names of “caminantes,” or migrants who would have to walk, and “especiales” — migrants who paid smugglers more so they could make at least part of their journey north in a vehicle.

Such crimes worry Harvey and his peers..

“One thing we don’t want, and I think we could all say the same thing as chiefs, is crimes happening in our community and us not knowing about it,” he said.