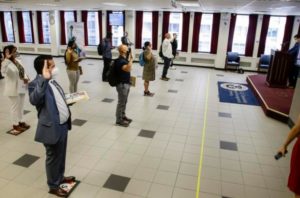 In less than 30 days, the cash-strapped U.S. Citizenship and Immigration Services (USCIS) will start furloughing more than 13,400 employees — nearly 70% of its workforce — unless Congress authorizes emergency funding to avoid a scenario that would cripple the nation’s legal immigration system.

USCIS — which administers green card applications, work permits, asylum requests, naturalization ceremonies for would-be U.S. citizens and other immigration services — has been facing an unprecedented financial crisis, which it attributes to a drastic decrease in applications during the coronavirus pandemic that has deprived the fee-funded agency of its main source of revenue.

Thousands of USCIS employees have already received notices of their looming furloughs, which would start on August 3. “If that happens, the agency would be left with a skeleton crew that will make it difficult to sustain our critical mission of administering our nation’s lawful immigration system,” Joseph Edlow, deputy director for policy at USCIS and the de facto head of the agency, said in a statement to CBS News.

USCIS, which is a division of the Department of Homeland Security, informed Congress of its financial woes in the middle of May, requesting $1.2 billion in emergency funding and promising to repay the funds by imposing a 10% surcharge on applications. However, in the ensuing weeks, a standoff has emerged between Congress and the Trump administration, leaving a cloud of uncertainty hanging over the USCIS workforce and the millions of immigrants who file petitions with the agency in any given year.

Democratic and Republican congressional officials said the administration has yet to file a formal budget request, frustrating the lawmakers responsible for authorizing the funds. “It’s a moving target right now in terms of what specifically it is that we need to address in order to prevent these furloughs,” Democratic Congresswoman Lucille Roybal-Allard, the chair of the House Homeland Security Appropriations Subcommittee, told CBS News.