Home Federal Enforcement Some Migrants Now Sending Their Kids Across The Border Alone So The Kids Won’t Be Expelled, Say Lawyers 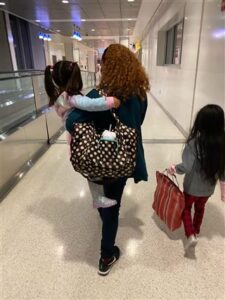 Currently, the Biden administration is expelling all new asylum seekers arriving in the U.S., citing Covid precautions — except children who arrive alone.

DONNA, TEXAS — While the number of children in Border Patrol custody is setting new records once again this week, immigration lawyers tell NBC News that some migrant families are choosing to send their children to the southern border alone because they see it as the best chance for remaining in the U.S.

Currently, the Biden administration is expelling all new asylum seekers arriving in the U.S., citing Covid-19 precautions — except for children who arrive by themselves.

“Still intact families who are desperate for their children’s safety are going to send their children to cross alone,” said immigration attorney Amy Maldonado, adding that the decision to send a child without a parent makes sense especially for those who have family members who can take care of the child in the U.S.

One family who spoke to NBC News on the condition of anonymity recently felt the impact of the policy firsthand. A four-year-old girl traveled to the U.S. from Guatemala with her aunt and cousin. The aunt and cousin considered a family under U.S. law, were immediately expelled. The child was deemed unaccompanied even though her mother was an asylum seeker already in the U.S. waiting to pick her up.

On March 5, the four-year-old was detained in the newly erected Donna, Texas, border processing center, called the “epicenter of overcrowding” by a Department of Homeland Security official. The girl described being scared and being woken up by the guards at night.

Her mother said she could not get word from Customs and Border Protection on the whereabouts of her child.

“I knew she was there [in detention] but I didn’t know where they were going to take her, or if they would send her to another family. I was very worried,” the mother said.