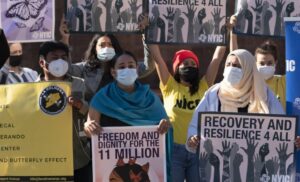 Some dramatic moves on immigration are expected in the early days of the Biden administration. Joe Biden will likely use executive orders to reverse some of President Donald Trump’s most controversial actions, rolling back moves that were a central feature of his administration and important to his base. The Biden administration plans to restore protection for people brought to the U.S. illegally as minors and stop using Pentagon funds to build a border wall. Biden unveiled a detailed, highly ambitious plan on immigration but it will take time to undo many actions taken by Trump. The incoming president will also likely face a divided Congress, making it difficult to enact any kind of sweeping, comprehensive changes to the nation’s immigration system. Here’s a look at what to expect:

A CHANGE OF TONE

Restricting immigration was a signature issue for Trump, who infamously called Mexicans rapists as he pledged to build border wall in launching his campaign. His administration banned travelers from some predominantly Muslim countries as one of its first acts, took many steps to limit legal immigration and cut the number of refugees allowed in the country by 80%.

Biden has said “immigration is central to who we are as a nation,” noting that most Americans can trace their ancestry to immigrants, but it isn’t a core issue. It’s not even mentioned on his transition website’s top priorities: COVID-19, economic recovery, racial justice and climate change.

Biden has said he will move quickly to undo some of Trump’s signature immigration initiatives. The border wall? The roughly 400 miles built so far won’t come down but the new administration won’t keep building it, or taking money from the Pentagon to fund it over the objections of Congress.