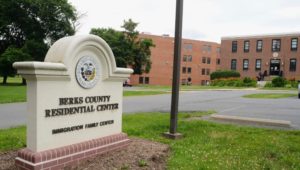 Two days of contentious legal arguments concluded Tuesday evening with no ruling on whether the 6-year-old Guatemalan girl, who has spent a record 195 days in the Berks County immigrant detention center, could soon leave with her father.

U.S. District Judge Joshua Wolson said he would rule as quickly as possible.

The fate of the girl, known by a first name, and her father, identified in court only as Mr. H., is being decided amid a broad public debate over the nation’s treatment of migrant children, and as advocates raise new calls and legal claims to try to close the Pennsylvania detention center.

ADVERTISEMENT
The hearing featured testimony from a mental-health authority who said Maddie has become deeply depressed — and from the attending mental-health provider at Berks, who said the girl is fine.

Where the plaintiff’s witness saw a child so distressed that she’s become disheveled, the government’s authority saw a girl whose hair may have been mussed by the hood of her unicorn costume.

Federal immigration authorities have offered to immediately release Maddie to her mother in New Jersey. But they won’t free her father, which the family’s lawyers said makes the overture merely a different form of family separation, one sure to inflict more harm on a suffering child.

“You never heard testimony that separating her from her father would be in her best interest,” lawyer Caroline Heller said in closing. “She needs to be released from custody as soon as possible, with her father. … We’re dealing with the mental health and safety of a little girl.”

Assistant U.S. Attorney Veronica Finkelstein said the federal courtroom was sounding a bit like Family Court, with a judge asked to decide if a child should be placed with one parent or the other.

Maddie’s lawyers want the court to release the family — but that decision rests with U.S. Immigration and Customs Enforcement, and in the appeals available under the Immigration Court system, Finkelstein said. The federal court should not intervene in the detention processes and decisions of the executive-branch agency charged with making them, she said.