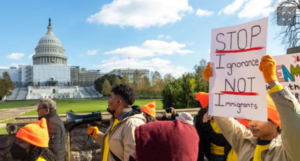 It’s the end of the year, and Congress is scrambling to get as much done as possible in the lame-duck session. While there are plenty of must-pass pieces of legislation to finish, two senators are trying to whip up support for something that has been impossible in the last decade: immigration reform.

There are pieces in the proposal from Sens. Kyrsten Sinema, I-Ariz., and Thom Tillis, R-N.C., that make sense, and on the surface, it’s an example of the kind of bipartisan problem-solving that the Senate all too often eschews these days. It perfectly fits into the Sinema brand of legislation. But once you take a look under the hood, you can see this framework is already in danger of collapsing. Its joints are ill-fitting, and its structure is unsound.

The best part of the proposal would include a pathway to citizenship for the roughly 2 million “Dreamers” who arrived in the U.S. as undocumented children. Democrats have been pursuing such a path for citizenship for the better part of a decade, even more so after the Trump administration nearly axed the Obama-era fix known as Deferred Action for Childhood Arrivals.

That absolutely tracks with the balancing act Democrats have tried to pull on immigration for decades as they use “securing the border” as a carrot for Republicans to join their reform efforts. It’s a false dichotomy in my view, given the ever-changing guideposts for what a “secure” border looks like. But Sinema and Tillis’ proposal would also attempt to pull off a similar trade-off as a way to repair the broken asylum system at the southern border — and that’s where things really run into trouble for them.