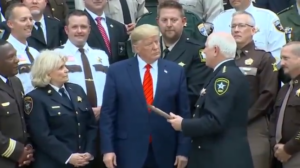 WASHINGTON (SBG) – On the same day the acting director of national intelligence testified on Capitol Hill and talk in Washington, D.C. swirled around impeachment, President Trump was at the White House talking about immigration.

It’s still a top legislative issue for him this fall and for his 2020 presidential campaign. It’s also a top issue for sheriffs who police border states. Many of those sheriffs came to the White House this week looking for answers. They want answers for what they call immigration loopholes for asylum and sanctuary cities.

“Asylum is made for a reason, there’s a reason for people to be able to seek asylum, those folks deserve it without getting it clogged up with a bunch of people that are not true asylum seekers,” said Sheriff Mark Cage of Eddy County, New Mexico.

“What we try to tell people is this is about drug trafficking and human trafficking in our country,” said Sheriff Mark Lamb of Pinal County, Arizona.

They said they want Congress to act, as immigration was a topic of a hearing just this week. Republicans focused their argument on gangs and drugs.

However, Democrats on Capitol Hill want to make sure those in need aren’t denied access to our country.