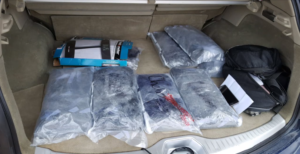 Thousands of miles from Washington D.C. in Pima County, Arizona, Sheriff Mark Napier works on the front lines of the border crisis.

He showed “Nightline” a section of the border barrier that “was and still is a major drug trafficking and human trafficking corridor,” he said.

“We know that somebody came here with a kid,” he said, pointing out refuse along the barrier. “There’s children’s clothing, diapers, a small container of baby oil.”

From there, people traversing the desert would have 40 miles to go before “they get to something that would resemble civilization where they can be picked up by somebody else,” Napier said.

For more than three decades, this has been Napier’s home — the largest border county on the southern border.

On the national stage, what happens here has become a political flashpoint. Just this week, President Donald Trump touted his campaign promise of building a wall at the U.S. southern border while speaking south of San Diego.

“It’s a very powerful, very powerful wall, the likes of which probably to this extent has not been built before,” Trump said while showing off a portion of the 30-foot-tall bollard wall. “Plus it’s designed to absorb heat, so it’s extremely hot. The wall is, you won’t be able to touch it. You can fry an egg on that wall. It’s very, very hot.”

It’s the latest in a debate that’s dominated headlines and divided the country. But for the lifelong Republican sheriff, the border is much more than a policy dispute.

“The border is clearly a public safety threat to my county because of the drug and human trafficking that comes across that border,” Napier said. “Public safety’s not a partisan issue, it’s not a political issue. It’s quality of life, it’s a human condition issue. So partisanship and political ideology should not intersect [with] what I do to maintain public safety in my county.”