Home Uncategorized She Got Her Baby Back From Immigration Foster Care. Now, What? 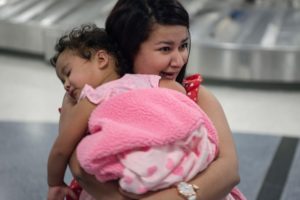 HOUSTON — Sendy Karina Ferrera Amaya clutched a stuffed unicorn outside the airport arrival gate Saturday morning, as her fiancé Juan Barrera Bucio paced back and forth.

He spotted the baby first.

“There’s someone coming with a little girl,” he said. “Yes, it’s her.”

It had been 103 days since Ferrera’s 1-year-old daughter Liah landed in foster care for immigrant children, separated under the Trump administration’s “zero tolerance” policy after crossing the border with her uncle. Ferrera had left Honduras months earlier, when Liah was too small to travel. Ferrera made it into the U.S. undetected, and the plan was for her brother to do the same with Liah, but he was caught and deported. Then the Department of Health and Human Services had to be convinced to give the baby back to Ferrera.

The department has argued that stringent vetting is necessary to ensure children vulnerable to human trafficking are kept safe. But for Ferrera, the process felt opaque, full of never-ending questions. After a background check that included two home studies and a DNA test — and anguish about whether this day would come at all — Ferrera got word on Friday:

She needed to pay for two plane tickets, one for her daughter, who was living at an undisclosed location in Texas, and one for a caretaker who would accompany her to Houston. Ferrera’s fiancé raced to wire the $895. Then, just after 3 a.m. the following morning, they began the drive from their trailer home in Sulphur, Louisiana, to the George Bush Intercontinental Airport.

Four hours later, there Liah was, wrapped in a pink blanket, dozing in her caretaker’s arms. The baby stirred only for a moment when her tearful mother swept her up and kissed her, inhaling deeply. Then, Liah’s eyes rolled shut, and she melted into Ferrera’s shoulder, fast asleep.