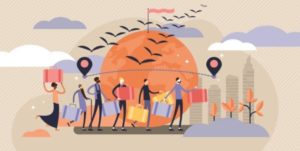 The long-run health of the United States economy is in serious danger from a self-inflicted wound: the Trump administration’s big cuts in immigration.

The latest data indicate that immigration to the United States fell 70 percent last year to only 200,000 people — the lowest level in more than a decade. Major causes of the decline, experts say, are the administration’s restrictions as well as the unwelcoming tone set by the president himself.

On top of this, the White House has announced that the United States will accept only 18,000 refugees in the coming year, down from the current limit of 30,000 and a small fraction of the 110,000 President Barack Obama said should be allowed into the United States in 2016.

The Trump administration may find the falling immigration numbers a cause for celebration. But, more than any drop in the stock market or fall in manufacturing sentiment or consumer confidence, they present the scariest economic news we have seen in some time. The impact of low immigration on the American economy will be profoundly negative, both now and in the future.

The first reason is the simplest. The growth rate of the economy comes from two parts: income growth per capita and population growth.

Birthrates generally plunge when countries get rich. Scholars debate the causes, but the inescapable fact of fewer babies results in an aging population in advanced economies. And the overall population is already shrinking, or will soon most likely be, in Japan, China, South Korea and much of Europe.

But that hasn’t been happening in the United States, at least not until now. Yes, the country is aging, and the baby boomers are retiring. But its population is expected to continue to grow by90 million, from 327 million today, over the next 40 years or so, assuming immigration continues at its historical rates.

That assumption is critical, however. The only way the United States has avoided the demographic pressure facing other rich countries is through immigration. The census estimate of population growth includes around 1.4 million immigrants a year.

The birthrates for women born in the United States have been dropping, just as they have in other rich countries. The fertility “replacement rate” needed to sustain the existing population level is around 2.1 children per woman. But last year, the birthrate in the United States dropped to 1.73, approaching the dwindling rates in the European Union, China and Japan.