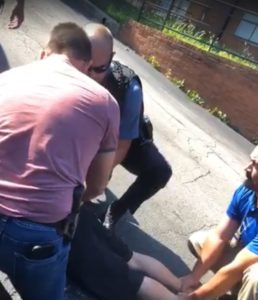 Immigration agents captured on a Facebook live video Monday morning in Kansas City are seen smashing the driver side window of a car, pulling the driver out and arresting him after he refused to get out of the car.

The man had refused to emerge after a woman in the car asked the agents to show a warrant and they didn’t do so, telling her they had a “paperless” warrant.

One of the agents breaks the window about 21 minutes into the video, which was shot in the parking lot of an apartment complex in eastern Kansas City. The man is heard saying, “You know you’re not able to do that,” just before the agent breaks the window, pulls him out and forces him to the ground, where he’s handcuffed face down. A child is heard wimpering in the car.

Kansas City police are also on the scene, having arrived after the agents from Immigration and Customs Enforcement boxed in the car containing the man, the woman who shot the video and two children in the back seat.

As the father is about to be taken away, he’s shown asking to say goodbye to his son. An ICE agent turns down his request.

“Right now we’re being extremely nice to you, but what you just put us through, what we had to go through, you’re lucky I’m letting you talk to her right now,” the agent says. “So no, you can talk to him later, she can bring him up to where you’re gonna be and you can see them there.”

The video had 2,700 views as of Monday evening.

The woman who shot the video, Cheyenne Hoyt, told KCUR that the man arrested was Florencio Millan, her boyfriend and the father of her two children.

She said Millan is an undocumented Mexican national who arrived in the United States 19 years ago, when he was 13 years old. She said ICE agents did not say why he was being detained.