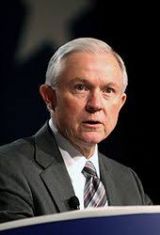 Attorney General Jeff Sessions appears to be exploring a rule that would expand his judicial power, and that some say would allow him to drastically reshape federal immigration policy.

In a notice posted this fall, the Department of Justice (DOJ) announced it is planning to propose a change to the circumstances in which the attorney general can take and rule on immigration cases.

Under the new proposal, the attorney general could make rulings on immigration cases before they get to the BIA.

He argued the proposed change, which was included in the fall semiannual regulatory agenda released by the White House, would give the attorney general too much power.

“This is an attorney general that has already demonstrated when he has done this under existing rules that he is biased, inhumane and, frankly, probably influenced by some racist views,” Saenz said.

“The Department of Justice’s record demonstrates a commitment to the safety and security of all Americans while treating all persons with fairness and dignity. To suggest otherwise is to ignore facts.”

The notice in the regulatory agenda, which maps out agency actions for the coming year, said the cases where the attorney general could intervene would include “those pending before the Board of Immigration Appeals but not yet decided and certain immigration judge decisions regardless of whether those decisions have been appealed to the BIA.”

Plans for the proposed rule were first listed on the spring regulatory agenda released in May. At that time, the expected release date was September 2018. The action has now been delayed until March.

BY LYDIA WHEELER for THE HILL
Read Full Article HERE