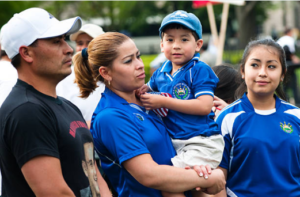 They arrive at the border with nothing, stripped of their money, their homes and often, their dignity. Now the United States is robbing them of the one thing they’ve miraculously clung to through their journey: each other.

President Trump’s new “zero tolerance” immigration policy aims at “taking back” the country by taking children from parents. About 700 families have in recent months been systematically separated, with children being separated from parents—even when families could legitimately apply for asylum, and even when doing so puts already terrorized families at even greater risk.

So the policy purporting to “deter” border crossings is, in practice, a fast track into legal purgatory, according to human-rights advocates. The notion of trying to discourage migrants by needlessly separating families is stunning enough; but Homeland Security’s singular policy to punish these specific families—who have braved hell to reach the border—marks an unprecedented level of ferocity.

“If this administration’s definition of success is to trap people in a burning house,” said Michelle Brané, director of the Migrant Rights and Justice program at the Women’s Refugee Commission, “that’s a pretty sad measure of success.”

While Trump wins cheers at home for cracking down on “criminals” invading the border, global outcry has erupted against the administration’s approach to immigration. The UN High Commissioner for Human Rights this week urged Trump immediately to “stop criminalizing what should at most be an administrative offense,” referring to the long-standing legal precept of dealing with immigration through civil, not criminal, procedures. But, in light of Trump’s general disdain for international legal precepts or political pressure, the high commissioner concluded, “in the US migration control appears to have been prioritised over the effective care and protection of migrant children.”

Activists observing the border chaos say the White House doesn’t just want to “control” the migrants, it seeks to brutalize them. After a field visit in McAllen, Texas, Anne Chandler, with the advocacy group Tahirih, reported, “I saw dozens upon dozens of heartbroken parents who didn’t know the whereabouts of their children. One father was shaking as he explained that he didn’t know if his child had been fed or is being mistreated. Another parent asked if his son would have to wear shackles to court.”

By Michelle Chen for THE NATION
Read Full Article HERE