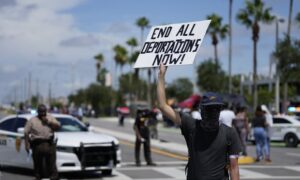 Harold Koh, a legal adviser and Obama administration veteran, criticises use of health protocol to expel thousands of migrants.

A senior legal adviser in the state department has accused the Biden administration of deporting Haitians illegally through the use of a public health law.

Harold Koh, a veteran of the Obama administration, had been due to leave government service to take up a teaching position at Oxford University. He wrote a letter to the state department leadership, lambasting the expulsions of thousands of Haitians in recent weeks.

A Haitian migrant carries a boy while waiting to board a bus provided by a humanitarian group after being released from US custody in Del Rio, Texas.
Haiti deportations justified because of Covid, Biden homeland secretary says
Read more
The 2 October letter reflects widespread unease in the state department at the recent treatment of Haitian migrants who had crossed the US-Mexico border and gathered in Texas seeking admission to the US – but were summarily put on planes and flown back to the unstable country they had fled.

Haiti has been rendered particularly dangerous of late by the July assassination of the president, Jovenel Moïse, and a subsequent powerful earthquake.

“There’s a lot of discontent,” an administration source said. “His views are pretty widespread within the state department.”

Less than two weeks ago, the US special envoy for Haiti, Daniel Foote, resigned over the issue and sent a resignation letter excoriating the administration for its “inhumane” mass deportation of Haitian migrants and asylum seekers to what he said was a highly dangerous “collapsed state”.

Joe Biden had continued using a mechanism introduced by Donald Trump, summarily expelling migrants, mostly from Haiti, under Title 42 of the 1944 Public Health and Service Act, a previously obscure piece of legislation that presented the Covid pandemic as a reason not to provide due process to asylum seekers from Haiti and Central America.

By Julian Borger For THE GUARDIAN
Read Full Article HERE