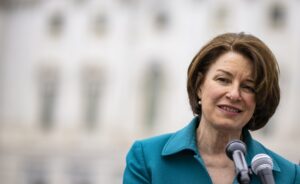 Sen. Amy Klobuchar and 13 colleagues asked the State Department what steps it is taking to support LGBTQ asylum-seekers.

A group of senators urged the State Department to take steps to better support LGBTQ asylum-seekers.

The letter — written by Sen. Amy Klobuchar, a Democrat from Minnesota, and signed by 13 of her Senate colleagues — requests that Secretary of State Antony Blinken provide additional details regarding a February announcement that the department would “use a broad range of diplomatic and programmatic tools and resources to protect vulnerable LGBTQI+ refugees and asylum seekers.”

In February, President Joe Biden signed a presidential memorandum directing all U.S. government agencies engaged abroad “to ensure that U.S. diplomacy and foreign assistance promote and protect the human rights of lesbian, gay, bisexual, transgender, queer, and intersex (LGBTQI+) persons around the world.” Pursuant to that memorandum, the State Department announced that it would coordinate with relevant agencies to protect LGBTQ asylum-seekers.

Klobuchar’s letter, dated Aug. 2 and made public Friday, Aug. 6, requests an update on what the department is doing to implement the president’s memorandum.

“We write to commend the State Department for taking swift action to implement President Biden’s expansive commitment to ‘pursue an end to violence and discrimination on the basis of sexual orientation, gender identity or expression, or sex characteristics, and to lead by the power of our example in the cause of advancing the human rights of LGBTQI+ persons around the world,'” the letter states. “At the same time, we also write regarding the need for additional steps to support LGBTQ asylum seekers.”

From 2007 to 2017, at least 4,385 people filed credible fear claims — meaning they feared that they might be harmed if they returned to their home country — that led to interviews by asylum officers that were coded as related to LGBTQ status, according to exclusive data obtained by NBC News through a Freedom of Information Act request to the U.S. Citizenship and Immigration Services.