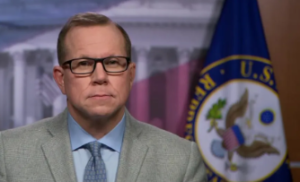 Sens. Thom Tillis, R-N.C., and Kyrsten Sinema, D-Ariz., are reviving talks on a potential immigration agreement that would see a pathway to citizenship combined with border security measures — an effort to see if there is appetite for a reform bill before Republicans take the House early next year.

Sources familiar with negotiations told Fox News that the two lawmakers have a draft framework for discussion that would see a pathway to citizenship for illegal immigrants protected (or eligible for protection) from deportation by the Deferred Action for Childhood Arrivals (DACA) program combined with border security funding. A Senate aide stressed that the discussions are in a very early stage and that the senators are circulating the framework to see if there is interest and a potential agreement. Another said that it was incorrect at this stage to describe the draft as a “deal.”

The border security measures would include keeping Title 42 — a Trump-era public health order that has been used to expel a majority of migrants at the border, but that is due to be wound down later this month — in place for at least one year, with a metric component in place for extensions.

Other border security elements would include hiring more Border Patrol agents as well as pay increases, and the creation of regional processing centers to surge resources at the border and judge asylum claims — a provision included in last year’s Bipartisan Border Solutions Act. It would also include resources for detention, deportation and expedited removal of illegal immigrants.

A source said that the funding for such measures would be at least $25 billion and could be upwards of $40 billion, which would be significantly higher than border security funding in previous versions of DACA-for-border security proposals.

That would be combined with a pathway to citizenship for what is estimated to be two million illegal immigrants who came to the U.S. as minors and are eligible for protection under the 2012 DACA program.