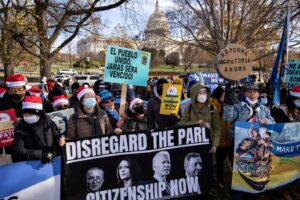 Durbin: Immigration remains ‘one of the major concerns in this reconciliation bill’

Efforts to reach consensus on Democrats’ sprawling social and climate spending bill are likely to stretch into next year, but key immigration players stress the delay won’t hinder long-awaited efforts to enshrine protections for millions of undocumented immigrants.

Senate Parliamentarian Elizabeth MacDonough, who is tasked with reviewing provisions in Democrats’ $2.2 trillion reconciliation bill, has yet to issue her decision on whether Democrats’ proposed immigration language complies with Senate rules, stalling release of the final text of that portion.

Under the so-called Byrd rule, measures passed through reconciliation, which allows a filibuster-proof majority, must directly affect the federal budget.

After initially targeting a pre-Christmas vote, Senate leaders have signaled they plan to resume work on the bill in January.

Senate Judiciary Chairman Richard J. Durbin, who is overseeing the bill’s immigration portion, said Thursday he hopes to return to the committee’s immigration work next month, calling it one of his key priorities for the legislation.

“I am focused on that as one of the major concerns in this reconciliation bill,” the Illinois Democrat said of the immigration provisions, noting his committee has so far presented three different immigration proposals to MacDonough. “We’re doing our best, making a good faith effort.”

Sen. Bob Menendez, D-N.J., another key immigration player, said he wasn’t concerned that delaying work on the reconciliation bill until after winter recess would jeopardize the bill’s immigration provisions.

If the bill’s vote is delayed until January, “we will take advantage of it by educating everybody about what it means and what the possibilities are,” Menendez said following a Democratic caucus lunch meeting Thursday.

Sen. Ben Ray Lujan, a Democrat from New Mexico and member of the Congressional Hispanic Caucus, struck a similar note of optimism.