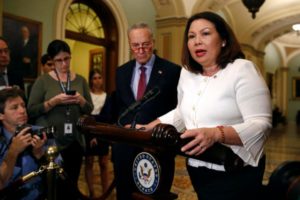 Washington — A group of Democratic senators led by U.S. Army veteran Tammy Duckworth of Illinois unveiled a proposal on Wednesday to shield certain undocumented family members of U.S. troops from deportation, a move aimed at safeguarding a little-known immigration program the Trump administration is considering ending.

The bill introduced by Duckworth would codify into law a U.S. Citizenship and Immigration Services (USCIS) program known as “Parole in Place,” which has been “under review” by the agency since the summer. The discretionary relief, which began under President George W. Bush, has helped undocumented family members of service members adjust their legal status without having to leave the U.S. and possibly being banned from entering the country for up to 10 years.

“Can you imagine being one of those Delta Force operators going in to kill the leader of ISIS and finding out just before you go on this operation that, by the way, the country that you defend is now going to deport your wife and leave your kids at home by themselves?” Duckworth told CBS News on Wednesday. “Not only is this inhumane and un-American — it is just stupid.”

The Parole in Place program has been in place for more than a decade, with USCIS offering the discretionary relief to immigrant spouses, parents and children of active-duty soldiers, active reservists and honorably discharged veterans. But attorneys learned this summer that the Trump administration was considering to end the protection as part of the president’s crackdown on legal and illegal immigration.

New: The Trump administration is reviewing whether to end a little-known program that helps undocumented family members of U.S. troops adjust their legal status.

Teresa, 72, the mother of Army soldier Cesar Vargas, could be among the last beneficiaries:https://t.co/FrvBi1CehX