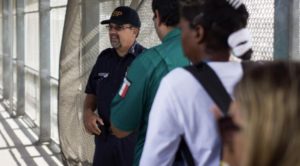 (CNN) – The Trump administration’s immigration policies have taken a toll on some of the officers tasked with carrying them out, according to a scathing report by Democratic Sen. Jeff Merkley.

The 81-page report released Thursday compiles whistleblower accounts and media reports to provide an overview of the administration’s crackdown on migrants seeking asylum in the United States and attempts to curb migration to the southern border.

In one email, dated August 12, 2019, and obtained by Merkley’s office, an asylum officer denounced one of the administration’s policies as “clearly designed to further this administration’s racist agenda of keeping Hispanic and Latino populations from entering the United States.” The email was first reported by The Washington Post.

The officer was referring to the so-called Migrant Protection Protocols program, which requires some migrants to stay in Mexico for the duration of their immigration proceedings. The program is being challenged in court, but has been allowed to proceed for the time being.

It’s not the first time asylum officers have expressed frustration over the program, which advocates argue puts migrants, many of whom are from Central America, in harm’s way.

In June, the union representing US asylum officers asked a federal court to end the policy, saying the directives are “fundamentally contrary to the moral fabric of our Nation and our international and domestic legal obligations.”

Merkley’s report, titled “Shattered Refuge,” emphasizes the frustrations held by some officials in the administration who are responsible for carrying out its policies and raises alarm over departmental actions that it alleges exacerbated the crisis at the southern border.

The report included details about:

* Six pregnant women in Customs and Border Protection custody were sent back to Mexico in May to await their immigration proceedings despite being several months pregnant, according to whistleblowers. The report cites a letter the American Civil Liberties Union directed to the Department of Homeland Security inspector general in September elevating concerns about the placement of pregnant women in the Migrant Protection Protocols program.

* The former head of the US Citizenship and Immigration Services asylum division, John L. Lafferty, was pushed out by then-acting Director Ken Cuccinelli. Whistleblowers perceived this to be “the result of acting as a committed, civil servant who played it by the book,” according to the report.

* In April, US Citizenship and Immigration Services moved to raise the standard for credible-fear screenings, the first step in the asylum process. A lawsuit was filed in June challenging the change.