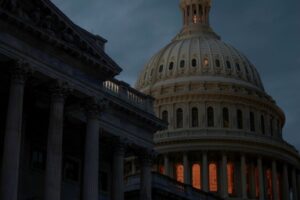 Proposal would have provided work permits, deportation protections to millions.

The arbiter of Senate rules found that Democrats’ plan to provide temporary protections for immigrants living in the U.S. illegally can’t be passed as a component of party lawmakers’ roughly $2 trillion education, healthcare and climate package.

The guidance provided by Senate parliamentarian Elizabeth MacDonough is set to force Democrats to remove the protections from the bill, the third time the party’s immigration proposals have been found to run afoul of the chamber’s rules. The current provisions would have shielded immigrants from deportation for five years and would have provided a five-year renewable work authorization, available to any immigrant who arrived in the country before 2011.

All of the measures Democrats hope to advance in the wide-ranging $2 trillion package must comply with a series of rules associated with reconciliation, the process Democrats are using to advance the legislation and skirt a filibuster in the Senate.

Chief among reconciliation’s restrictions is that measures in the bill must relate directly to the federal budget. In a brief finding, Ms. MacDonough objected to multiple aspects of the immigration proposal, including that it would allow some immigrants under the program to become eligible for green cards, and that the government wouldn’t have leeway to turn down some immigrants if they met the standards for the program.

She also said the measure covered substantially the same population as previous proposals that she rejected.

“These are substantial policy changes with lasting effects, just like those we previously considered, and outweigh the budgetary impact,” she wrote, according to a copy of her ruling reviewed by The Wall Street Journal.

The Congressional Budget Office estimated that the immigration provision would cover about 6.5 million immigrants living in the U.S. illegally.

Sen. Richard Durbin (D., Ill.), who helps craft immigration policy as the chairman of the Judiciary Committee, said he was disappointed by the finding.